On Sat. March 19, 2022 at the hierarchical Divine Liturgy celebrated by his eminence, Archbishop Kyrill of San Francisco and Western America two parishioners of St. Nicholas Church advanced to ordination to minor Holy Orders.

More photos to be posted when we get them. 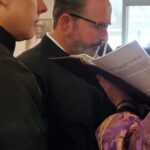 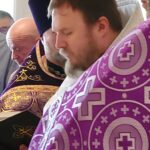 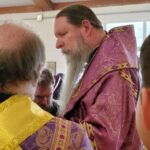 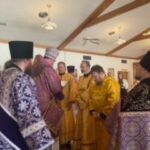 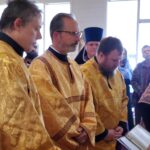 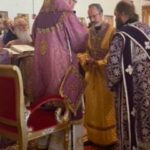 These orders are ancient within the Church and go back to at least the second century, and are mentioned by St. Hippolytus of Rome in his work, the Apostolic Tradition, including the prayers for ordination. A Reader, also called a Lector, Cantor, or Psalti, the Reader is the first order comprising participation in the Priesthood of Christ.  It is a sub-clerical order to which a man is tonsured and ordained, setting him apart as blessed by the bishop to read in services and in the Divine Liturgy.

After being tonsured, the reader is vested in a short phelonion, which he wears while reading the Epistle for the first time. This short phelon is then removed (and never worn thereafter) and replaced with a sticharion, which the reader generally wears thereafter whenever he performs his liturgical duties.  All degrees of clergy wear the sticharion. The orarion represents the grace of the Holy Spirit. The orarion will be tied around his waist, up over his shoulders (forming an X-shaped cross in back), and with the ends hanging down in front, tucked under the section around the waist in an X-shaped cross.

On Sat. March 19, 2022 at the hierarchical Divine Liturgy 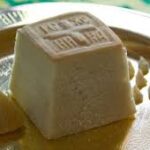 We are announcing that this Saturday we will hold a Prosphora 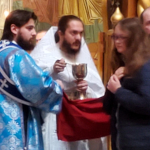